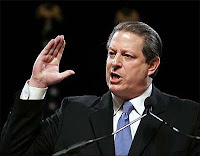 The former Vice President and 2000 Presidential nominee has remained steadfastly neutral during the nominating contest - some say angling to be a party power broker, with the more cynical pundits saying he was waiting to be called upon to break a potential deadlock by becoming the candidate himself through a convention second ballot.

However, Gore will break his long silence on Monday night in Michigan at a joint campaign rally appearance with Senator Obama.

In a statement on Monday afternoon, Gore stated that "A few hours from now I will step on stage in Detroit, Michigan to announce my support for Senator Barack Obama."

He added that "From now through Election Day, I intend to do whatever I can to make sure he is elected President of the United States."

Interestingly, the announcement comes on the same day as reports that Obama’s campaign team see his route to the vital 270 electoral college votes as more reliant on Michigan than the traditional path of winning either Ohio or Florida.