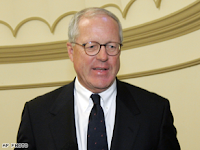 A key member of Barack Obama's vice-presidential search team, James Johnson, is stepping down after criticism over a mortgage he received, the Obama campaign said.

"Jim did not want to distract in any way from the very important task of gathering information about my vice presidential nominee, so he has made a decision to step aside that I accept," the presumptive Democratic presidential nominee said in a statement.

Republicans had been hammering Johnson since the Wall Street Journal reported Saturday that he received a good deal on a mortgage from Countrywide due to his friendship with the company's CEO Angelo Mozilo. Obama has criticized Countrywide in connection with the subprime mortgage crisis.