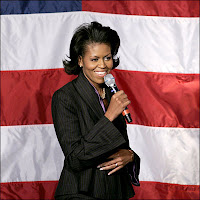 Fox news, never ones to shy away from controversy, have been injecting their own form of “fair and balanced" racism to campaign rhetoric.

The graphic "Outraged liberals: Stop picking on Obama's baby mama" was flashed during an interview with conservative columnist Michelle Malkin about whether Barack Obama's wife has been the target of unfair criticism.

This comes just one week after news anchors and commentators referred to Barack and Michelle's tender ‘fist-bump’, seen on stage as he proclaimed victory in the Democratic nomincation race, as a “terrorist fist jab”.

These comments against Michelle Obama are unique, and I believe are a preview of the attacks that can be expected in the run up to the General Election.

Unlike Senator Obama, whose mixed race heritage helps him transcend racial politics, Michelle, will apparently be targeted by those wishing to stir up racial tensions as campaign fodder.

New York Times columnist Maureen Dowd wrote that the backlash against Michelle Obama, who is black, was a "good preview of how Republicans will attack Michelle, suggesting that she does not share American values, mining a subtext of race."

Bill Shine, senior vice president of programming at Fox, said in a statement that a producer "exercised poor judgment" during the segment. The producer was not fired; no other disciplinary action was announced.
Email ThisBlogThis!Share to TwitterShare to FacebookShare to Pinterest
Posted by Richard Lane - 14:46
Labels: Barack Obama, Fox News, Michelle Obama