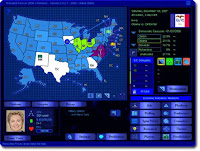 If you are an American politics junky (and lets face it, why wouldn’t you be!?), then I think you will probably enjoy this game.

President Forever allows you to run as any candidate – Republican, Democrat, Libertarian, Green, and Independent. Then, from fund raising to grass root building, through the primaries and caucuses, the bargaining for endorsements and then right through until November you must steer your candidate to election victory.

You have to make key speeches in states that matter, deal with unexpected scandals and campaign gaffes as well as use your finite budget to un-do your rival’s efforts.

It’s fairly reasonably priced at about £8, and I think it is well worth the investment.

P.S. I’m not being sponsored to plug this site. I just think it’s a great game!
Email ThisBlogThis!Share to TwitterShare to FacebookShare to Pinterest
Posted by Richard Lane - 09:36
Labels: President Forever 2008