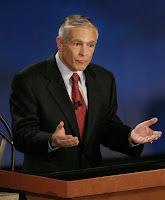 Former NATO General and 2004 Democratic presidential hopeful Wes Clark has been a vocal backer of Hillary Clinton during the primary contests. After ending speculation that he was preparing for a second run at the White House, Clark chose to become a powerful surrogate for Senator Clinton

I would argue this was largely cold calculation rather than a particular passion with Hillary’s politics - although they do share strong ties to Arkansas. Clark would have taken one look at the 2008 field of candidates and probably deemed that he could not beat then inevitable nominee Hillary Clinton, and would struggle to break in to the top tier of candidates against Obama and Edwards.

But rumours have recently surfaced that Clark is actively lobbying to secure the Vice Presidential spot on Obamas ticket.

This could potentially be a match made in heaven. Obama needs someone one with respected national security credentials - Clark led NATO troops in Kosovo in the 1990’s.

As a prominent Clinton supporter, Clark would also be an ideal unity candidate and be seen as an olive branch to fuse the two warring tribes.

What would prove more difficult is how Clark could remedy his new found affection for Senator Obama with his previous campaign rhetoric where he criticised Obama has being unready to lead on day one.

And for sure I would not rate Clark as amongst the A List of candidates - he is certainly no Clinton or Edwards. But Obama could certainly do worse.
Email ThisBlogThis!Share to TwitterShare to FacebookShare to Pinterest
Posted by Richard Lane - 12:29
Labels: Barack Obama, Dem VP, Wes Clarke