Can McCain Back in Again? 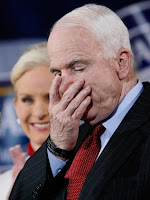 In the contest for president, Barack Obama is a magnetic candidate supported by a disciplined, well-organized campaign. John McCain seems wooden, with a campaign that appears to be in shambles. Yet Obama's lead in the polls over McCain is fragile because he so far has not won the support of a majority of American voters.

An effective and massively publicized foreign trip failed to push Obama to the 50 percent mark. Hopes of Democrats and fears of Republicans that he would get a major bounce in the polls when he clinched the nomination and then on his campaigning abroad have not been realized.

Overnight surveys by Gallup and Rasmussen for the past two weeks have shown Obama hovering around 46 percent, while McCain has declined from 45 percent to 41 percent after the wild acclaim for Obama in Berlin, for a 6-point deficit that is by no means insurmountable. These numbers have prompted speculation among Republican political practitioners that McCain can back into the presidency, just as he backed into his party's nomination.

Not even Bob Dole's dismal candidacy in 1996 generated less enthusiasm in GOP ranks than McCain's current effort. However, in winning the nomination this year, when he had been counted out after the disintegration of his campaign structure, McCain showed more fortitude than skill. He was blessed by a weak field of Republican competitors, who eliminated each other and left McCain as the last man standing.

But Obama is no Huckabee, Giuliani or Romney. He is the most spectacular campaigner of his generation, with appeal well beyond Democratic ranks. That he lingers below the 50 percent mark is a mystery among politicians of both parties. It is particularly troubling to Democrats who recall past Democratic candidates taking a huge lead over the summer before being overtaken or nearly overtaken by a surging Republican opponent. In 1976, Jimmy Carter took a 33-point summer lead over President Gerald Ford and won in a photo finish. In 1988, Michael Dukakis led George H.W. Bush by 17 points after being nominated in Atlanta before he lost the election. Al Gore and John Kerry were ahead of George W. Bush in the summer.

One candid Republican consultant says that the massive Carter and Dukakis summer leads were illusory, based on large generic Democratic leads. But their generic lead is back at 15 points after 12 years of a Republican Congress and eight years of George W. Bush.

Clearly, Obama has not yet closed the deal with the people to accept a young, inexperienced African-American as their president. Obama had virtually clinched the nomination when white working men in Pennsylvania, Ohio and West Virginia poured out to vote and carried their states comfortably for Hillary Clinton. It was not because of unalterable affection for her.

Obama's difficulty in reaching the 50 percent mark reflects an overwhelmingly white undecided vote at 10 to 15 percent.

These were target voters for Obama when he ventured into the war zones to demonstrate his mettle as a future commander in chief. He looked good, sounded good and committed no serious gaffes. But sitting by the popular Gen. David Petraeus and disagreeing with his military judgment may not have been the way to win over undecided white working men.

The toughest interrogation of Obama was CBS anchor Katie Couric's in Jordan last Tuesday. She asked four different times whether the troop surge he had opposed was instrumental in reducing violence in Iraq. Each time, Obama answered straight from talking points by citing "the great effort of our young men and women in uniform." That sounded like the old politics. He would have sounded more like a new politician if he had simply said, "Yes, the strategy did work." That would have infuriated anti-war activists, but not enough for them to drop Obama.

Several Democrats I have talked to noted that recent Democratic presidents got elected with a minority of the vote and also that McCain is further below the 50 percent standard than Obama. But McCain, running a flawed campaign in a big Democratic year, is dangerously close. He still could back in unless Obama closes the deal.