John Edwards Puts Himself Back in the Frame 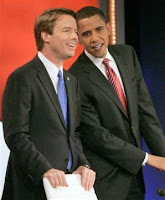 Interesting to note that John Edwards appears to be changing his tune regarding the Vice Presidential spot somewhat.

After his unambiguous assertion that he would not serve as Vice President he John Edwards has now said that he would "seriously consider" a VP offer.

"My answer to that is, I've run for vice president, I've run for president twice. I would do anything that I felt I could do to serve this country but I think it's a huge presumption for me or anybody else to suggest what Senator Obama may decide," he said.

Pressed on whether that meant he might join the ticket if asked, Edwards would not rule it out. "I am prepared to seriously consider anything, anything he asks me to do for our country," he told NPR.
Email ThisBlogThis!Share to TwitterShare to FacebookShare to Pinterest
Posted by Richard Lane - 10:38
Labels: Dem VP, John Edwards