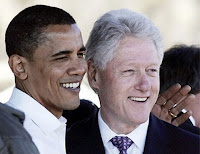 I predicted it would happen!

Former President Clinton and Senator Barack Obama spoke by phone on Monday, trying to put behind them rumours of lingering bad blood.

Gossip has circulated since Senator Hillary Clinton withdrew from the Presidential race that President Clinton was bearing a grudge against the presumptive nominee, Barack Obama.

However, the chairman of Senator Hillary Clinton's unsuccessful presidential bid, Terry McAuliffe, said Sunday the former president was angered by media reports suggesting he did not plan to actively support Obama in the general election.

"He was angry that these ridiculous stories were out here, and these supposed close friends of the president — none of the close friends ever got called," McAuliffe said, referring to anonymous sources quoted in some stories. "What happens, a lot of time, is people like to pretend they're close so they can tell the reporters that they're close, but, you know, they're just talking."

Obama campaign spokesman Bill Burton added that Obama "had a terrific conversation with President Clinton and is honoured to have his support in this campaign."

Clinton wants to campaign "with and for" Obama after the hard-fought primary campaign between Obama and Hillary Clinton, Clinton spokesman Matt McKenna said. Clinton "renewed his offer to do whatever he can to ensure Senator Obama is our next president."

I have to say, I am pretty excited about a joint rally between arguably the two greatest Democratic politicians of their respective generations.
Email ThisBlogThis!Share to TwitterShare to FacebookShare to Pinterest
Posted by Richard Lane - 09:12
Labels: Barack Obama, Bill Clinton