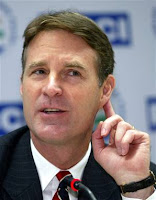 As I posted this morning, rumours have been picking up steam that Barack Obama is on the verge of announcing Indiana Senator Evan Bayh as his running mate.

This chatter is now getting louder, with The Huffington Post reporting on Tuesday afternoon that an announcement is imminent.

Bill Browning states on the site that "Barack Obama will announce his vice-presidential choice Wednesday morning. It will be Indiana Senator Evan Bayh."

The article also offers these bits of tantalizing evidence:

1) The website ObamaBayh08.com is taken. For a tiny sliver of time late last week, you could type in the URL and you'd be forwarded to another site. Where do you think it took you? The Democratic Party website.

2) Just got an invite from the Obama campaign to attend an appearance on Wednesday that isn't on Obama's official calendar. Why not? The campaign said, "I can't tell you what the event is about, but we want to make sure you have a ticket so you can cover it for the Bilerico Project. We want Bilerico Project to be there for this one."