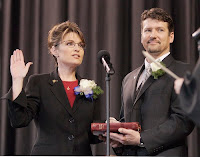 An issue for Alaska Gov. Sarah Palin that is already drawing attention in the opening moments of her debut as the Republican vice presidential pick is an ongoing state ethics probe that was launched just a few weeks ago.

An independent investigator appointed by a panel of state legislators earlier this month is looking into whether Mrs. Palin dismissed a top law enforcement official in her administration because he failed to fire a state trooper, Mike Wooten, who went through a messy divorce with Mrs. Palin’s sister.

The investigation follows on the heels of Mrs. Palin’s abrupt decision in mid-July to dismiss Walt Monegan, her Public Safety Commissioner. Mrs. Palin said she wanted to take the department in a different direction, but questions emerged after Mr. Monegan said he felt pressured to fire Mr. Wooten.

As part of efforts to demonstrate she welcomed the inquiry, Mrs. Palin asked the state’s attorney general to look into the allegations as well.
Email ThisBlogThis!Share to TwitterShare to FacebookShare to Pinterest
Posted by Richard Lane - 19:09
Labels: Sarah Palin