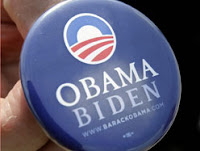 ... Now we know, it's Biden. Obama's played it safe which is hardly surprising given his recent slump in the polls. The Obama campaign will have come to terms with the fact that they don't have the margins to pick someone more in tune with their campaign's theme of change and renewal in Washington. If Obama were 10, 15 points up then we may well have seen Kathleen Sebelius or Tim Kaine, Governors of Kansas and Virginia respectively, tapped as the Veep. Someone 'fresh', different, someone who with Obama could be seen to represent Change.

However, contrary to all expectations, Obama is either dead level or very slightly behind McCain depending on which polls you read. Obama is running around 15 points behind a "generic democrat" candidate in polling. This is extremely worrying for the Obama campaign. Clearly, Obama is still the favourite to win this election: the American electorate repeatedly says that it wants 'Change' in Washington and Obama is the living definition of that change. Race aside, his entire approach to politics is out of kilter with the norms of the American political mainstream and it is part of his magnetism at the ballot box. I think, perhaps, that the American electorate are getting cold cold feet.

John McCain has been in the Senate for 21 years. 'Change' wouldn't seem to be embodied by a septuagenarian white millionaire with over twenty years working within the beltway. Nevertheless, unlike with Hillary Clinton, experience seems to be winning over change in round two.

Which brings us to Joseph Robinette Biden (more on the middle name later). He's been the senate for longer than John McCain, he's run for President a couple of times and will have a back catalogue of gaffes, misspeaks and legislative votes which the Republican's will already have prepped for attack ads - expect the first one within the next 12-24hrs. His middle name (I profess ignorance as to its provenance) sounds French. Having a 'French connection' was used to rubbish Kerry in 2004. You can just hear the voiceover on the ads.

Let me just say: Biden is clearly qualified to be Vice-President. Frankly he's more qualified than either Obama or McCain. In part, this is good news for Obama because it means he can turn to critics who talk of youth and inexperience and reply 'Biden'. It also means that the ticket looks bottom heavy. He's also surrendered the change mantle by tying himself to a seasoned insider and won't be using the age card - Biden's not that much younger than McCain.

Biden isn't a game changer, he doesn't set the race alight - he's a safe sensible and inoffensive choice. Not that many column inches will be spent on him after the next week or so (unless he gaffes). That Obama & his campaign feel that it's necessary to take that option tells us all we need to know about how this race has shifted and that Obama's on the back foot.

I think its a pretty solid choice though. Should help him in ohio perhaps