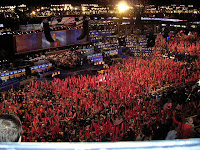 The Democratic convention has captivated the world this past week. The world’s media have rushed to Denver, Colorado to see the ‘crowning’ of Barack Obama as the Democrat’s Presidential candidate. This Democratic convention is indeed very special. There appears to be an apparent tension in Denver. Michelle Obama’s stirring introduction. Hillary Clinton delivering a key speech, backing Obama. Hillary supporters refusing to back down. Nervous Democrats urging unity, whilst concerning themselves with Obama’s slim lead in the polls. Rallying calls from THE Democratic family, the Kennedy’s. Then add to that the arrests of the would-be assassins of Mr Obama – yet all they appear to be are crazy junkies on a racist rant, not a credible threat to the Senator.

All of this and we’re only half way through the Convention! When Obama takes to the main stage at Invesco Field, in front of almost 80,000 Democrats some might be forgiven for thinking the election is over, such is the drama and intense interest in this Democratic convention this year. The definite feel I get from watching the Convention is that it so unique. It is an American institution. It is much more than the British Party Conferences. There is so much more pomp and patriotism involved in the States. The Democratic Convention, and presumably the Republican Convention to follow, is the glitz and glamour centre piece of the American political calendar. It is the centre stage for the nominees to steal the show, to boost opinion polls and rejuvenate their campaigns after slow summers.

This is exactly what Barack Obama will be hoping when he steps out in front of that monster crowd in Denver. This is the beginning to the real election push for Obama and McCain. All that went before will take a back seat. From now until November 4th, the Presidential Election campaign is well and truly on. Get your banners out, your political t shirts on and switch on your new channel (anything but Fox please) and get ready for the Election. It’s going to be special.