The verdict is in 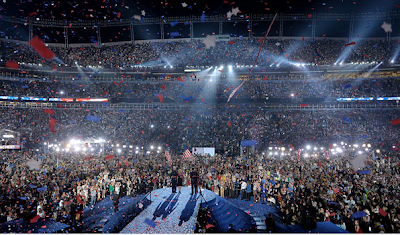 The reviews are in - and they are almost universally positive.

“On Thursday night, the speechmaker showed, in words, that he was also a man of experience, and a man who wanted to give something back to the people who gave it to him.”

“The speech as a text was not one of Obama’s best but it was delivered with the passion that he is often said to lack.”

“There then followed fireworks and a through milking of the applause of the adoring crowd which ran the risk of appearing too triumphaIist.”

“The Party got what it wanted from Obama speech”

“The Democratic nominee delivers the attack many thought had been lacking”

“What he gave here was a combination of old and new -- new toughness coupled with the message that got him to this point.”

“As a piece of political theatre, it was undeniably powerful.”

“But the speech itself, though filled with some powerful moments, did not always soar to the rhetorical heights for which the senator is known.”

“it seemed Mr Obama had decided to answer two lines of criticism: that there is little substance to his slogans and that he has not been effective in attacking John McCain.

…. at the expense of giving a speech that will be remembered as one of his finest.”

“Just What the Doctor Ordered”

“Obama did exactly what he needed to do to set the stage for the fall campaign.”

“There was a very subtle interweaving of Obama’s past themes with the new theme of the American promise.”

“It was one of the most intellectually elegant speeches I’ve heard. Besides that, I expect that it will do Obama and the Democrats a lot of good in the weeks ahead.”

“A candidate known -- fairly or not - for his soaring rhetoric delivered a speech heavy on specific policy points, themes of broad values, and empathy for the daily challenges faced by many. “

“Obama brought down his candidacy down to ground level.”

“There was plenty in the speech for Republicans to pick apart at their convention in St. Paul next week, like how he will pay for the litany of proposals he laid out tonight. But they will be hard-pressed to match the intensity, the specificity and the effectiveness of Obama in Denver.”

Mark Halperin gives Barack Obama an ‘A+’: “Obama appeared to achieve every goal the pundits and political backseat drivers had set out for him in advance: he showed his heart, emphasized the economy, and, most of all, looked like a president.”

“Barack Obama's acceptance speech tonight wasn't what people have come to expect from a Barack Obama speech. It wasn't filled with lofty rhetoric or grand cadences. It did not induce tears or euphoria. It didn't have the forced, kitschy call and response tropes — "and that's the change we need!" — that defaced nearly every other major speech at this convention. At 43 minutes, nailing his dismount at 10:53 pm, it wasn't even very long. It was lean, efficient, practical and very very tough.”
Email ThisBlogThis!Share to TwitterShare to FacebookShare to Pinterest
Posted by Richard Lane - 10:09