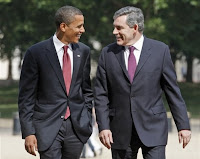 Evening Standard: Gordon Brown has broken with British convention and made clear that he favours Barack Obama as the next US President.
In a departure from the usual self-denying ordinance of Prime Ministers past, Brown has written an article for The Monitor magazine in which he praises Obama's plans to get the US out of the housing slump.

Referring to the anxieties facing voters across the globe during the economic slowdown, he says: "Around the world, it is progressive politicians who are grappling with these challenges....In the electrifying US Presidential campaign, it is the Democrats who are generating the ideas to help people through more difficult times. To help prevent people from losing their home, Barack Obama has proposed a Foreclosure Prevention Fund to increase emergency pre-foreclosure counselling, and help families facing repossession."