Is Sarah Palin's daughter any of your business? 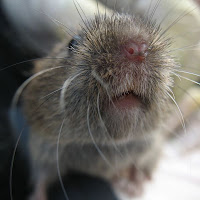 Reports out today seem to suggest that a man's reluctance to marry, or settle down with a single woman, may be down to a 'genetic flaw'.

Interesting though that the evidence seems to be based around a hormone which affects voles' abilities to remain monogamous.

Surely then that makes voles the original 'love rat' then? ;-)

Anyway, it seems that relationships are in the spotlight in politics at the moment following news in America that John McCain's Vice Presidential running-mate's daughter is expecting a child outside of wedlock.

Yes, you did hear that right. The daughter of the deputy of a potential President is pregnant and people are therefore questioning whether McCain and his V-P can do their jobs properly if elected?

I for one have never been particular interested in the private lives of politicians - no matter the political hue. Financial mismanagement or fraudulent behaviour is one thing - but personal relationship problems are usually another.

Do such problems stop you being able to do your job? Usually, no. What we need are honest polticians, who should not have to pretend to be something they are not in order to get on in life. Real people, with real families and real problems.

In my opinion, if you want all your politicians to be super-human, what you will generally end up with is one of two things:

1) Politicians who are not representative of the society they are called to represent, as they are likely to have tried to live apart from anything that could possibly be seen as tarnishing their reputation.

2) Politicians who are very good at hiding their past/present problems, so they are kept from public view.

Neither is particularly healthy.

Perhaps the pregnancy of Sarah Palin's daughter will give the Vice-Presidential nominee a new insight into the issue of unmarried motherhood. Or maybe Sarah Palin and her daughter have nothing to apologise for and we should leave them alone so her daughter and grandchild can get on with their own lives. Do politicians have to be answerable for the personal conduct of their friends and relatives - possibly if those friends and relatives were also up for election, but otherwise, generally speaking, no.

Don't get me wrong, I do not support Palin, but that is my point. There are many reasons NOT to vote for Palin (being a right wing conservative Republican, is a reason enough in my book) or for John McCain, but whether her daughter is married or not is not one of them.

And by the same token, having a wife who is pregnant does not make you any more capable as a politician either. Just in case there are any Lib Dems reading this. ;-)

After all, “private lives” are called that for a reason.
-
(Photo Source: Bruce McAdam, http://commons.wikimedia.org/wiki/Image:Field_Vole_by_Bruce_McAdam.jpg)

There's something not right about the idea of Bristol Palin's reasonable fair game. How Sarah got the job OTOH ...

IN ALASKA, THE LEGAL AGE OF CONSENT FOR SEX IS 16, SO PALIN'S DAUGHTER WAS NOT RAPED BY THE FATHER---HOWEVER MOST OTHER RIGHT WING CONSERVATIVE STATES IN AMERICA LIKE FLORIDA DO NOT HAVE THAT IN THEIR LAWS. I HAVE A SUGGESTION FOR CONSERVATIVES, WHO OBSESS ABOUT HAVING ZERO TOLERANCE FOR THIS KIND OF BEHAVIOR-----EXTRADITE THE FATHER OF THE CHILD TO FLORIDA. NO EVIDENCE? MAKE SOME! REPUBLICANS ARE GOOD AT THAT AND THEY HAVE DONE SO BEFORE. EVEN THEIR ATTY GEN. MUKASEY HAS STATED "NOT EVERY VIOLATION OF THE LAW IS A CRIME"... THEREFORE IN THE CAUSE OF GOOD CONSERVATIVE LAW ENFORCEMENT, I PERSONALLY PLEDGE THAT I WILL SUPPORT THE PROSECUTION AND HARSHEST SENTENCE FOR THE FATHER OF THIS CHILD.