Palin – can she talk the talk? 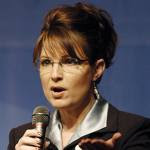 They say the press coverage of her has been so bad that all she needs to do tonight is walk on stage straight and put together a few coherent sentences and she’ll win the backing of the Republican Convention.

Palin’s first few days in the candidacy for VP have certainly been a rough ride for her and the Republican Party, with fresh scandals about her family and conduct emerge on a daily basis. So far we’ve heard news that she allegedly tried to use her power as Governor to have her brother in law fired from his job in retaliation for him divorcing her sister, that her husband was caught drink driving, that her teenage daughter, Bristol, is five months pregnant by a hockey player who boasts on his MySpace page that he’s a ‘’f***in redneck‘’ who ‘’doesn’t want kids’’.

And today we are greeted with fresh controversy as a video of Palin appearing at the Alaskan Independence Party Convention earlier in the year wishing them ‘’good luck on a successful and inspiring convention’’ does the rounds on newspaper websites and YouTube. As various pundits have pointed out, the AIP’s motto ‘’Alaska First’’ and the support of many within the Party for secession from the United States sits rather uncomfortably with McCain’s attempt to pitch himself as the patriotic candidate encapsulated in his own election motto of ‘’Country First’’.

Surely this spells disaster for the Republicans. The first day of the Convention was put on hold because of Hurricane Gustav and now the woman given the task of reinvigorating the Party at Minneapolis has proved herself perhaps a little too Maverick, even for McCain.

But rather surprisingly Palin appears to be weathering the storm pretty well. Her staunch support for guns and even stauncher opposition to abortion has endeared her to social conservatives, a crucial base which the Republicans will need to mobilise if they hope to win the election, and one that up until now McCain has found it hard to connect to. And whilst in the past the slightest misdemeanour of a candidate in the Presidential race saw a drop in polling points amongst the Right wing evangelical vote (Bush dropped four points amongst this group when it was revealed in the run up to the 2000 election that he had a twenty year old drink driving conviction) Palin’s team are doing quite the damage limitation job. By weaving these stories of scandal into a narrative which pitches her as just an everyday American hockey mom they have managed to endear her to conservatives.

So the story of her teenage daughter’s pregnancy out of wedlock rapidly becomes the story of a family standing by their daughter, and (importantly) of a young woman who has rejected abortion and is set to marry her unborn child’s father. A sex scandal melts away to be replaced by the shining example of good old American family values. If the responses of the delegates in Minneapolis are anything to go by this seems to have worked. One delegate told a TV crew ‘’I think she’s (Palin) shown that her family have taken on her values and are living it’’.

All eyes will be on Palin as she gives her speech tonight in which she is expected to lay out her details of her policy objectives, but by the look of things a straight walk and a bit of talk will be enough.
Email ThisBlogThis!Share to TwitterShare to FacebookShare to Pinterest
Posted by Richard Lane - 20:51
Labels: Sarah Palin

My cousin recommended this blog and she was totally right keep up the fantastic work!