The view from New Hampshire 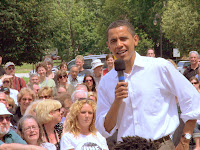 This past week I have been working in New Hampshire on the campaign trail with the New Hampshire Democrats. Fortunately for me I was able to attend a town hall meeting with Barack Obama in Hopkington, NH. This was the moment I had been waiting for, a chance to see Obama speak in person. The timing of my visit to New Hampshire could not have been better. On my last full day in the State I was going to be seeing Senator Obama in the flesh. All the talk of Obama being an electrifying presence was in fact true. I was a trembling, nervous wreck at 1pm waiting outside the Hopkington Town Hall. Senator Obama was not expected on until 5pm. His aura was affecting me already, and I had hours still to wait!

The location of his speech was quite symbolic. Hopkington is a small, rural and very middle class town in the north of this vast and wild State. This is heartland of the undecided American vote. People who are fed up of feeling the brunt of Bush’s economic policies, but still unsure of the liberal Senator from Illinois. Obama was here to stress the point that he is the man to solve the economic crisis that is hurting America so much. He is the man to resolve the Iraq War and take the fight to the Taleban, Al-Qaeda and Osama bin-Laden. He is the man to reduce American dependence on foreign oil. Putting it simply, he is the man to trust.

Obama’s presence was indeed electrifying. The crowd loved him. There was definitely something special about him, but not too special. Not too special that people could not feel in touch with him. The one thing I had heard most from Obama doubters while out in New Hampshire was that he is arrogant, and the voters did not like that. I could see what they meant, but I did not see the arrogance in a negative light. I felt that Obama was self assured and confident. What’s wrong with that? If he is going to be the next President of America he will need all his confidence to tackle the important issues facing America. There were also many personal touches to his appearance, which appealed to me. His sensitive and reassuring words, which he gave to a tearful mother of a US soldier about to embark on his second tour of duty to Iraq, was very heartfelt.

Of course the audience was pro-Obama, and he will have to face more critical people from now until November. But he still maintained his aura of self-belief, and passion for the American people that has stood out throughout the election campaign. There was no confusion about polices or differences of opinion, which cannot be said of McCain and Palin. Obama laid out his message to the people in Hopkington town hall in a manner that will have struck a chord with many average Americans. They are the ones who will win the election for Obama; but they could easily lose it for him as well.