Biden to Palin: Don't lecture me 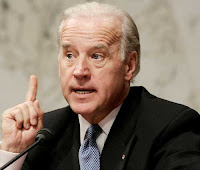 CNN - Joe Biden Thursday night told Sarah Palin not to lecture him on patriotism, after week of attacks mocking him for his statement the wealthy should be patriotic and pay higher taxes because not enough has been asked of them.

"Sarah Palin had great fun saying Joe Biden thinks paying taxes is patriotic. Well, let me tell you what Joe Biden thinks," the Delaware senator said at an outdoor rally. "Joe Biden thinks that anybody who takes millions of dollars offshore to avoid paying their fair share is unpatriotic."

The Obama-Biden campaign has accused John McCain of saying publicly he would close offshore banking loopholes, but saying otherwise in private.

"That is not patriotic and it will stop, it will stop in an Obama-Biden administration! Enough! I've had it up to here! Don't lecture me on patriotism," shouted Biden, getting drowned out by the applause of his supporters. "I'm dead tired of being taken advantage of. I'm getting tired of it."
Email ThisBlogThis!Share to TwitterShare to FacebookShare to Pinterest
Posted by Richard Lane - 15:28
Labels: Joe Biden, Sarah Palin