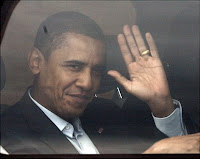 Washington Post - Barack Obama is outspending John McCain at nearly a three-to-one clip on television time in the final weeks of the presidential election, according to ad buy information obtained by The Fix, a financial edge that is almost certainly contributing to the momentum for the Illinois senator in key battleground states.

From Sept. 30 to Oct. 6, Obama spent more than $20 million on television ads in 17 states including more than $3 million in Pennsylvania and more than $2 million each in Florida, Michigan and Ohio. McCain in that same time frame spent just $7.2 million in 15 states. Even when the Republican National Committee's independent expenditure spending in Indiana, Michigan, Ohio, Pennsylvania, Virginia and Wisconsin is factored in (a total of $5.3 million), Obama still outspent the combined GOP forces by roughly $8 million in the last week alone.

The spending edge enjoyed by Obama has been used almost exclusively to hammer McCain as both a clone of the current president and someone who is out of touch on key domestic issues -- most notably the economy. The assertion of Obama's spending edge has coincided with the collapse of the financial industry and a refocusing by voters on the economy to turn the election from a toss up to one in which the Democratic candidate has moved into a discernible lead.

While the struggles of McCain and his party over the Wall Street bailout bill that passed Congress last week after much sturm und drang have been well documented, the practical political impact of Obama's decision to forego public financing for the general election and McCain's choice to accept the $84 million in public funds has not been as fully explored.

Obama's fundraising machine has continued to churn in recent months -- bringing in $67.5 million in August alone and ending that month with more than $77 million on hand. (Reports for September are not due at the Federal Election Commission until Oct. 20.)

Obama's ad spending strategy has been based on the idea of stretching McCain to the limit in a series of non-traditional battlegrounds (Indiana, North Carolina, Colorado, Virginia), knowing that such an approach would force the cash-poorer Republican's hand at some point.

That decision paid off last week when McCain pulled down his television ads in Michigan, a move due in large part to the prohibitive cost of continuing to run commercials in the Wolverine State. A look at advertising in the last week in Michigan showed Obama dropping nearly $2.2 million as compared to $642,000 for McCain and just over $1 million by the RNC -- a difference of nearly $600,000 in favor of the Illinois senator.

A detailed look at campaign spending on ads over the last week shows clearly how Obama is using his financial edge over McCain. In 13 of the 15 states where both candidates were on television, Obama outspent McCain -- in some states, drastically.

In Florida, where recent polling suggests an Obama surge, the Illinois senator disbursed more than $2.8 million for television ads in the last week while McCain spent $623,000 -- a massive $2.17 million spending gap.

In North Carolina, Obama dropped approximately $1.5 million on television commercials last week while McCain spent only $137,000. Such a wide spending disparity explains why a series of polls has shown Obama trending upward in the Tarheel State of late.

Even in Pennsylvania, the state where McCain is now focusing much of his time and energy in the final month of the campaign, Obama's spending advantage is massive. Obama disbursed a little more than $3 million in the Keystone State last month as compared to $1.2 million in ad spending by McCain and another $807,000 by the RNC. It adds up to a million-dollar edge for Obama on television -- meaning that he outspending Republican by roughly 33 percent in Pennsylvania.

In Virginia, a state that has gone Republican in every presidential election since 1964, Obama's pronounced spending advantage is also being felt. Obama spent $1.6 million on ads in the Commonwealth last week while the combined forces of McCain and the RNC spent $909,000 -- giving Obama a $700,000 spending lead.

Only in Minnesota and Iowa did McCain have a spending edge on television over Obama in the last week.

In Minnesota, the McCain spent $377,000 on television, far more than the $196,000 Obama spent during the same period. Republicans saw a significant uptick in their numbers in Minnesota following the national party convention in August although most recent surveys show Obama reclaiming a statistically significant lead. History is also against McCain in the state as no Republican presidential nominee has carried Minnesota since 1972.

In Iowa, McCain spent $297,000 on television as compared to $224,000 for Obama. That's rough parity in a state where polling shows Obama with a comfortable lead. McCain has spent considerable time, attention and money in Iowa, however, a strategy that has baffled many within the Obama campaign. Iowa went for then Vice President Al Gore in 2000 by 4,000 votes in 2000 but George W. Bush carried it by 10,000 votes four years later.

Spending by the RNC's independent expenditure arm has kept McCain within shouting distance of Obama in several crucial states including Ohio and Wisconsin.

Is Obama's spending edge conclusive when it comes to determining the outcome on Nov. 4? No. External events can -- and always seem to -- intrude on even the best laid of political plans and strategies. But, Obama's fundraising prowess has provided him a major leg up in the final month of the campaign that, when combined with the detrimental effects the focus on the economy has had on McCain, make it an uphill climb to victory for the Arizona senator.
Email ThisBlogThis!Share to TwitterShare to FacebookShare to Pinterest
Posted by Richard Lane - 15:59
Labels: 2008 Election, Advertising, Barack Obama, Electoral College, John McCain