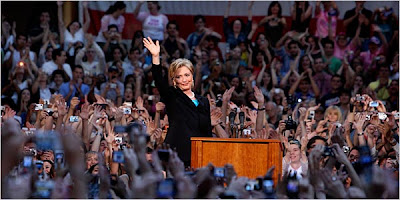 “I endorse him, and throw my full support behind him. And I ask all of you to join me in working as hard for Barack Obama as you have for me.”

It was with more than a twinge of sadness that I watched Hillary’s speech this evening that drew to a close her marathon endeavour to be elected as the first female president.

After a campaign that has lasted 16 months (or perhaps two decades?) we finally have our nominees, even if they are not the ones most people had predicted this time last year (Clinton vs. Giuliani anyone?)

No matter which side of the political spectrum you come from this has been a truly historic campaign and I believe this was reflected by the real sense of history this evening.

I think Hillary was (belatedly) gracious and munificent in her praise of Obama this evening and the impression is that most of her supporters have now moved through the five stages of grief and have reached acceptance that Senator Obama is the nominee.

It was important for Hillary to stress that what unites the Democrats is far greater than what divides them. The Republicans have not made universal healthcare or gay rights a fundamental platform of their movement. And as she pointed out, 28 years of the past 40 have been lived under a Republican government.

"Just think how much more progress we could have made over the past 40 years if we had a Democratic president. Think about the lost opportunities of these past seven years – on the environment and the economy, on health care and civil rights, on education, foreign policy and the Supreme Court. Imagine how far we could’ve come, how much we could’ve achieved if we had just had a Democrat in the White House."

My reading of the speech was that there has been a begrudging acknowledgment that the Democratic movement and a liberal agenda is ultimately bigger than one man or one woman or even one family.

And the verdict? Well a friend of mine who is a parishiner of the Church of Obama sent me a wry little text stating "She had saved the best until last..." I think the healing has begun already.

On a slightly different note I was curious as to whether Barack Obama had been watching the speech. The BBC reported that the Illinois Senator had been seen leaving his Chicago home with golf clubs shortly before the speech began.

Regardless of this Senator Obama extended generous recognition and gratitude to Hillary Clinton and her campaign. I actually thought his comments were very humble and kind-hearted and recognised the contribution Hillary Clinton has made to the Democratic party over many years.

So what happens next?

I would expect to see a joint rally between the former and potential First Families in the next week. And this will be be incredibly powerful political imagery – Hillary & Bill Clinton with Barack & Michelle Obama.

Wait for two things to happen if the joint rally takes place – number one is a bump in Barack’s poll numbers. This should happen anyway as he has been inundated with gushing headlines and editorials in the past few days. But the ‘hand over of the mantle’ imagery that will result from the occasion would be priceless. A new generation

Secondly, wait to be bombarded with editorials analysing every aspect of the event - the chemistry the two of them have on stage, how Michelle reacts to Hillary, does Bill look dejected? And then the religious combing of the poll numbers and focus group results - do they work together?

Remember the John Edward's endorsement? The excitement that was sparked from Obama and Edwards joint appearance will look like an Al Gore lecture on tax reform compared to the Obama/Clinton show.

Click here to read the text of the full address
Email ThisBlogThis!Share to TwitterShare to FacebookShare to Pinterest
Posted by Richard Lane - 22:20 0 comments
Labels: Hillary Clinton

When I was working on the Clinton campaign in California I had a journalist and photographer follow me around for a few days. Apparently he was quite taken with the Englishman in California campaign, and frankly a little puzzled as to why I had travelled 6,000 miles to work on a campaign that wasn't paying me and that I couldn't vote for. (Maybe he had a point?)

So I found out today that his finished masterpeice (hmmm...) has ended up on YouTube!

Of course this how now become all consuming. I am a little obsessed with how many views it has had, who has commented on it (no one...), and what my rating is (a rather feeble 2.6 stars.)

So if you're feeling charitable, give me a 5* rating and a gushing comment!
Email ThisBlogThis!Share to TwitterShare to FacebookShare to Pinterest
Posted by Richard Lane - 16:40 1 comments
Labels: San Francisco Campaign, YouTube 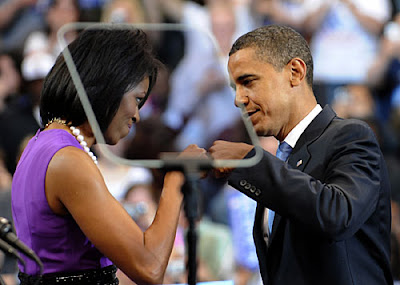 After more than 16 months, roughly $110m, 52 states, 17 million votes and countless amounts of coffee and donuts, Hillary Clinton is preparing to withdraw from the campaign.

On Saturday, Senator Clinton will suspend her campaign and offer (tacit?) endorsement of Barack Obama.

I genuinely feel a hint of sadness about Senator Clinton's demise. Having worked on the campaign I know the amount of hard work, dedication and passion that motivates everyone who has been involved.

What is important now though is that the healing process begins for the Democratic party. Although the rhetoric between the candidates has warmed considerably during recent weeks there is still a lot of disapointment and distrust. The media seemed to have picked up with enthusiasm on the anger felt by Obama supporters at what some believe was the injection of race into the campaign by the Clintons. However, I believe many have overlooked the sense of anger felt from Clinton supporters.

I am sure some of this is the feeling that Hillary has been denied what was rightfully hers (note: not my opinion!) and that it was all meant to be. But I think many legitimately feel that Senator Clinton has been treated dismissively and disrespectfully. Any candidate should be treated with respect when they put themselves on the line and go out to fight for what they believe in.

Barack Obama should certainly take note and ensure he pays attention to, but does not pander to, those who have dedicated large amounts of time, money and effort to Hillary's campaign.
Email ThisBlogThis!Share to TwitterShare to FacebookShare to Pinterest
Posted by Richard Lane - 16:25 0 comments
Labels: Barack Obama, Hillary Clinton, San Francisco Campaign
Newer Posts Home
Subscribe to: Posts (Atom)