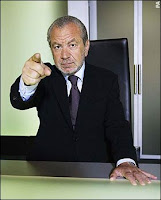 According to today's Telegraph, Sir Alan Sugar has ruled himself out of the running to be the Labour candidate for Mayor of London in 2012 - despite a poll showing he would enjoy considerable support amongst the Capitals voters.

The tycoon and TV star said he thought the job would be a “walk in the park”, but conceded that the conflicts that would arise from his numerous business entanglements would make a political career unlikely.

The Labour Party will need to double its efforts to find an A-List candidate following the findings of the latest Yougov poll of 1,067 Londoners. Its results suggest that if a Mayoral election were to be held tomorrow between former adversaries Ken Livingstone and current Mayor Boris Johnson, BoJo would win 49 – 33.