There is a new e-petition on the Number 10 website which is doing the rounds across the right wing blogosphere. The petition states that "We the undersigned petition the Prime Minister to resign". So far it has a little over 4000 signatories.
I was having a little look over the names of those who have called on the Prime Minister to stand down and was surprised to find a certain Mr. Tony Blair amongst the list of names: 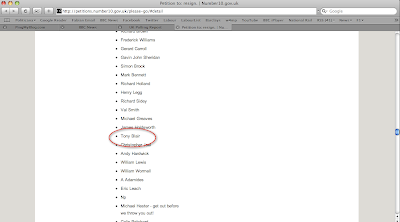 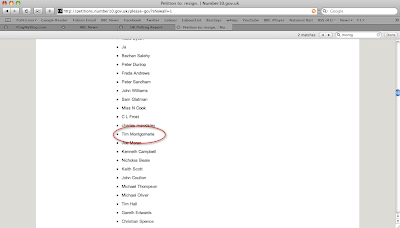 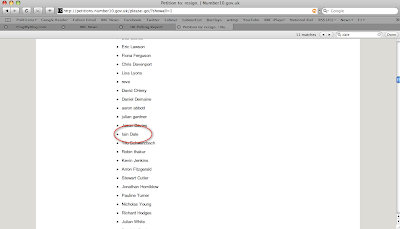 Perhaps more surprising is the addition of Secretary of State for Children, Schools and Families, Ed Balls, to the line up of those who would like to see Gordon resign. The supposedly ultra loyal Brownite can be seen on the list below: 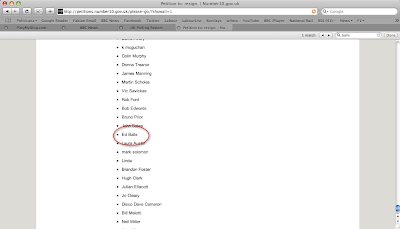 Of course we have to question the validity of some of these names given the appearance of legendary mobster Al Capone on the petition. He of course died in 1947. Of syphilis apparently. 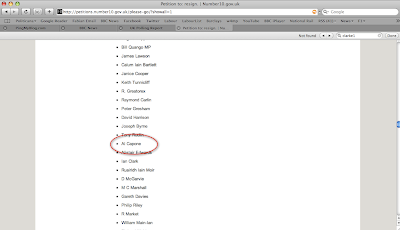 Although we probably don't have to wonder too much about whether Iain Dale and Tim Montgomerie have been calling on the Prime Minister to tender his resignation...

You got my hopes up

you really did get my hopes up!

I love that you put Al Capone died of syphillis. Where could you have learned that?

@ Jamie. Well, I have a very odd friend who is obsessed with two things. Serial killers and syphilis. ;o)

Considering the right wingers are aiming for a million signatures, this ain't doin very well!

Considering the right wingers are aiming for a million signatures, this ain't doin very well!

In prescribing Lorazepam, it is a must that patients are told of its advantages and disadvantages.
ativan cost
Ativan - Wipe away anxiety
Buy Ativan (Lorazepam) at reliable online pharmacy and save extra money! No prescription! No hidden fees!
As there are a lot of anxiety drugs out in the market today, it will be best for you to consult a doctor and tell him your history.
http://www.replicaonnet.com/ - lorazepam online
Don’t miss one second in doing so, it will save you a lot of trouble.

26 inches tv under 400 pounds
bonus bez depozytu za free
thin Acer laptop 15 inch under 700 dollars
poker za darmo bez depozytu bonusy
besplatne igre kostenlos poker online
If in a given round of betting is not no bet, the player can wait. Waiting (check) means that the right to take action passes to the next player in the direction of clockwise.
holdem online oyna gratuit poker na pieniadze
If all the players around the table waiting round of betting is completed.
learn poker spelen texas school
If you have any questions regarding qualification for the World Series , send them to the address wsop@pokerstars.eu .
* World Series of Poker and WSOP are trademarks of Caesars Interactive Entertainment, Inc. . or companies ( grouped under the name Harrah 's). Caesars does not sponsor or endorse, nor is it in any way affiliated with PokerStars or its products, services , promotions or tournaments . No promotion or tournament on this website does not guarantee a place or its availability or the possibility to register for any WSOP and WSOP related , which is at the sole discretion of Harrah's .