Why we should keep our nuclear weapons 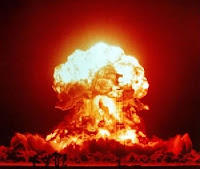 Barack Obama this week used a speech in Prague to outline his ambitious goal of a nuclear weapon free world. In his address President Obama conceded that such a vision would not be realised in his lifetime, but asserted that the United States had a "moral responsibility" to start taking steps to rid the world of these weapons.

Today there are around 27,000 nuclear weapons in the world (12,000 of which are operational; the rest stockpiled). The majority are held by the United States and Russia.

In the United Kingdom the Government is committed to developing a new generation of nuclear deterrent, despite Gordon Brown indicating that Britain was ready to reduce its own number of Trident warheads if there is a multilateral disarmament agreement.

Would a world without nuclear weapons ever become a reality and more importantly, would this be a safer and more secure place?

The possibility of a nuclear free world remains remote. President Obama has claimed explicitly that the United States will maintain a ‘robust nuclear deterrent’ for as long as any other country does. The BBC sums up this approach to nuclear disarmament very succinctly – “so if just one country maintains nuclear weapons, so will the US. Otherwise that country could dominate the world. And if the US does, so will Russia and China. And the French will not want to rely on the Americans so they will keep them and the British will not want the French to be the only ones in Europe with them, so the British will keep them too”.

There is no doubt that nuclear weapons have been a transformational force in world politics since their first use in 1945. Since then eight countries – USA, Russia, China, Great Britain, France, India, Pakistan and Israel – have developed nuclear arsenals.

Since 1945, none of these countries have ever deployed nuclear weapons in war.

There have been a few close calls, most notably during the tensions between the United States and the USSR during the Cuban Missile Crisis. But with the exception of skirmishes around the Kashmir border, no country possessing nuclear weapons has ever been in direct conflict with one another.

Despite the enormous danger posed by the development of these weapons we have in fact lived through the most sustained period in history without major conflict breaking out between the world’s great powers. The most prominent threats to our national security no longer come from world wars between rival powers but from smaller groups and failed states. The doctrine of mutually assured destruction ensures a tense but stable peace. The stakes of nuclear war promote a more restrained foreign policy and a less trigger happy approach to conflict.
Nuclear weapons have potentially saved millions of lives over the past 60years. The proxy wars fought between the United States and the Soviet Union were bloody and costly, but pale in comparison to the potential destruction that would have been wrought from conflict between the two cold war super powers even without nuclear weapons.

To put it simply we can not ‘un-invent’ nuclear weapon technology. And we can never ensure that all 195 countries in the world will not seek to develop or deploy these weapons. What we must do is ensure that unstable and hostile nations do not obtain nuclear weapons and that the current stockpiles remain secure and unused.

So perhaps before we ditch the bomb, we should give serious consideration to just how secure a post-nuclear world would be and whether the removal of these weapons would in fact save lives.
First posted at LabourList

No, I cannot tell to you.

Yes, I understand you. In it something is also thought excellent, agree with you.

I apologise, but, in my opinion, you commit an error. Write to me in PM, we will discuss.

It is very a pity to me, I can help nothing, but it is assured, that to you will help to find the correct decision. Do not despair.

I apologise, but, in my opinion, you are mistaken. Write to me in PM, we will discuss.

I suggest you to come on a site where there is a lot of information on a theme interesting you.