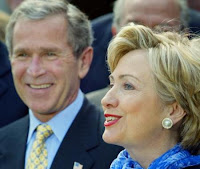 He called Hillary fat!!
... that is according to a new 'tell all' book by former White House speech writer Matt Latimer, who claims the 43rd President was convinced the former First Lady would win the Democratic nomination, remarking 'Wait till her fat ass is sitting at this desk'.
Bush allegedly also slammed Barack Obama for being too inexperienced for the office and asked if Sarah Palin had served as 'Governor of Guam'
Full story here.