In April this year the United States began its census count - something that has been conducted every 10 years since 1790. In December 2010, the Census Bureau will deliver it's findings on population information to the President for apportionment, and in March 2011 its redistricting data will be delivered to states.

The result will track and measure the demographic and population changes across the country and will be an insight in to which states are increasing in size and the migration patterns that are causing these shifts.

This all sounds rather dull, right?

Well in one sense it is somewhat mind numbing, but as attention turns to the 2012 Presidential election it is worth bearing in mind that the population changes in each state will determine how Electoral College Votes are proportioned.

In 2008, Barack Obama won a landslide in the Electoral College, securing 365 Electoral College Votes (ECV) to John McCain's 173. This was done, in part, by winning handsomely in key swing states such as Florida (27 ECV), Virginia (13 ECV) and Ohio (20 ECV).

But with the 2012 election expected to be much closer than 2008 (GOP nominee dependent), the final margin of victory could be much narrower for the winning in candidate (George W. Bush beat Al Gore in 2000 by 271 to 266 ECV).

Early projections suggest that safe Democratic seats will be the big losers in the electoral college redistribution, with safe Republican seats gaining.

By these calculations, the Democrats would start the 2012 Presidential election with six fewer ECV from their safest seats than when they won in 2008. The Republicans would see a net gain of six. Key swing states such as Florida will see their importance increase with a potential gain of two ECV.

I think these early projections will mean several things, but primarily that the Latino vote in the United States will continue to grow in importance. Much of the population growth and demographic changes in states such as Florida has been driven by growing Latino communities. Barack Obama went to great lengths to court their vote in 2008 and won it comprehensively, beating the Republican ticket 67% - 31%. This crucial swing block (generally 'liberal' on issues such as immigration but often conservative on social issues due to catholic beliefs) could potentially be a saving grace for the Democrats and President Obama in 2012 given the continuing anti-immigration rhetoric of the Republican party which alienates many Hispanic voters.

Secondly, we can expect Florida to continue to increase it's importance as the must win state for any presidential candidate (Bill Clinton, in 1992, is the only candidate to have been elected President since 1960 - when Florida only had 10 ECV compared to its 27 today - without winning Florida). Florida could potentially be worth 29 ECV - more than Virgina and North Carolina combined and greater than the prize of Ohio or Pennsylvania. 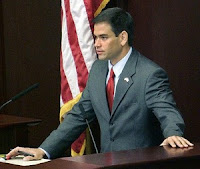 These two points bring me to the biggest winner from the 2010 US census - the soon to be Junior Senator from Florida, Marco Rubio. The Tea Party favourite won a resounding victory over independent candidate Gov. Charlie Christ last week and is seen as a rising star in the GOP. He is young (only 39 years old), charismatic, and his Cuban heritage means he appeals to the key Hispanic voters needed to win not just in Florida but in states such as Nevada and New Mexico.

It's a fairly safe bet to assume that any potential Republican Presidential candidate in 2012 will be closely watching his performance in the Senate with an eye to elevating him to the role of Vice Presidential pick. Indeed, Sarah Palin was an early endorser of his (and takes the credit for his eclipsing of Charlie Christ) and Mitt Romney, Mike Huckabee and Tim Pawlenty have all invested considerable amounts of time raising money and campaigning for him in the run up to his election.
Email ThisBlogThis!Share to TwitterShare to FacebookShare to Pinterest
Posted by Richard Lane - 17:36
Labels: 2012 Presidential Election, Barack Obama, Democratic Party, Election 2012, Florida, GOP, Marco Rubio, Republican Party

Hello, you site is very funny he told me to cheer up .. Merry Christmas.

Great writing! You may want to follow up on this topic???

One lie leads to another.

If you use birth control as a solution — what is your problem?

The  Panic room  design is impressive and fresh out
of the box, but I would say far from being comfortable.
The sea was calm and visibility was about 10 miles.
The Red Robin is expected to open after July 4.
Spread the word!

LeptoConnect is a supplement that is mainly concerned in burning unwanted fats so as to give you faster weight-loss results. The stored fats are its main target and its makers were applauded because of this good objective. The best way to fight weight-gain is to prevent the growth of unwanted substances that contributes great in gaining more pounds.
LeptoConnect Reviews

Crypto Mojo is the one-stop destination for crypto news, basics, trading tips for bitcoin and other cryptocurrencies, price prediction, and reviews.